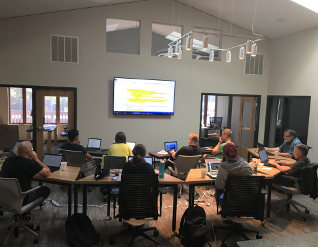 For years Xenos elders and senior sphere leaders have worked in separate locations, several without any office space. Now, after a few months of renovation at Main Campus, they have a central location in which to work and collaborate.

The new offices are in the former Office Auditorium space, which, earlier in the summer, was moved to the office building’s lower level (in the old Study Center space). Over the summer crews worked to create offices for senior leaders, as well as a conference room and small kitchen. 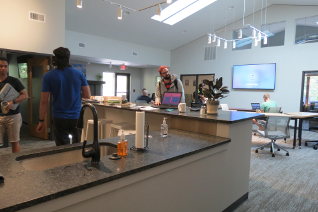 In keeping with Xenos’ policy of employees sharing office space, there’ll be 2-3 people in each office. This policy allows us to spend less on facilities and promotes time accountability. It also allows workers to benefit from relationships they develop working in the same space.

Two people pleased about the new offices are elders Josh Benadum and Bret McCallum, who have worked without an office for years. “Before this new space, I studied exclusively in coffee shops around town. It got kind of expensive, and distracting,” Josh says. “I tried to work at home, but with two small children that wasn't working either.” 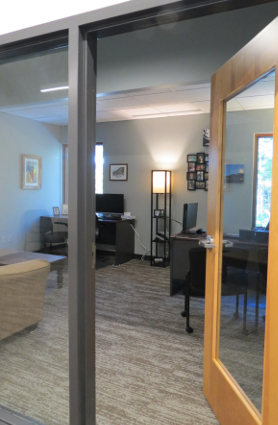 In addition to being able to focus better, Josh says it has made communication much more efficient and precise. “Being in close proximity to the other sphere leaders is cutting down on email communication since there are so many opportunities to interact face to face."

Bret agrees and welcomes the new offices. “I've been a nomad for my 14 years of Xenos employment. The new space allows more face-to-face communication about important matters.”

And he says the policy of staff sharing office space is important, supporting the idea of frugally stewarding money and resources that God has provided. He says it also helps enforce a non-negotiable ethos of Xenos--“Sharing an office reflects our value on plurality in leadership.”

This project’s cost, as well the cost for the relocated Study Center and Office Auditorium, was covered by cash reserves, with no additional debt being taken on to resolve the pressing need for senior staff space. At the same time, office space freed by leaders who had offices on site will help alleviate space constraints impacting other staff.