Xenos is about to expand its Pacesetters ministry, which serves senior citizens. Starting next month it will be adding a bi-weekly daytime Bible study taught by Gary DeLashmutt and tailored to people 65 and older. Gary will start with a series on the Signs of Jesus from the book of John on March 12th. 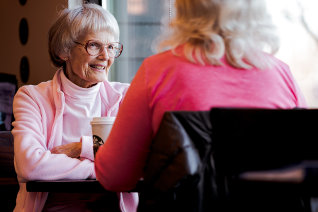 The backbone of this new ministry is 4 senior-aged Xenos home churches. They’ve been working with Senior Sphere Leader Ben Foust to put together a study that will appeal to older people, and be able to address their spiritual and practical needs. The study will also be an excellent avenue for sharing the gospel with older people.

Ben says it’s very exciting because it’s clear that God is behind the new effort. “God has been bringing together various threads--people, resources, availability, and consensus--to now meet a real need that has existed for a while in Xenos.”

Ben says these older home church members are awesome, active Christians for whom the term “pacesetter” can be accurately applied. “It’s a critical mass of quality seniors setting the tone for everyone else, and we want to offer them the most exciting, dynamic seniors’ ministry around.”

The need for a strong seniors ministry at Xenos will only be increasing in the coming years.
While there are just a handful of senior-aged home churches now, the number of people over 60
in Xenos is set to surge over a thousand in the next 5 years.

Ben says he and the home churches he’s been working with have a vision to make the future
exciting, not bleak, for those approaching their later years. “We have a lot of high schoolers who
look forward to their college years because of the exciting, challenging things going on in the
college ministry. We hope to create the same excitement for empty nesters, who see the
passion and purpose these ‘pacesetters’ have, and will want to follow their lead into their senior
years.”

Ben says that a common missing ingredient in senior’s ministry is mission, and that they aim to
build something that goes beyond just a social event or a time-filler. “We want to capitalize on
the workforce God has raised up among us, and make a real impact for the kingdom among the
lost.”

For the last couple of years the Pacesetter ministry has offered quarterly meetings on topics
relevant to people who are empty nesters and older. This new Bible study will come under the
Pacesetter banner, expanding it to include this Bible study.