For nearly 23 years the carpet in the Main Campus Auditorium and lobby has seen it all—multiple weekly Central Teachings, hundreds of kids for VBS, thousands of people attending XSI, and regular use throughout the week for school, Dwell classes, weddings, and outside groups.

The COVID-19 shutdowns have given Dwell a unique opportunity to follow-through on long-standing plans to replace the stained and worn blue-green carpet, as well as making other improvements. 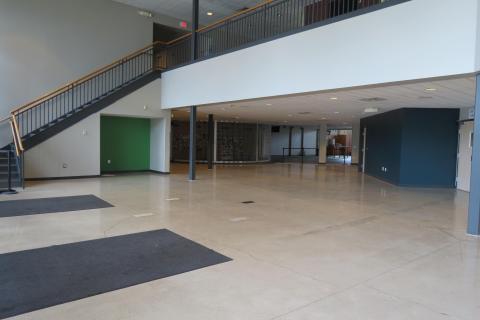 “We have discussed annually, for several years, replacing that carpet and doing some other upgrades,” Operations Division Coordinator Steve Bauer says. “In 2019 we decided to fund carpet replacement and a few other upgrades to the interior of the building. With the move to our new Dwell church name, we also wanted to reflect some of the new design elements related to the church and our signature, so we had the concept in place for such enhancements in 2020.”

The problem: working around all those weekly Central Teachings and events. Steve says they didn’t know how they would pull it off with the short time between uses.

Then came the 2020 shutdowns. Steve says it gave them the opportunity to complete the project with much simpler logistics and at a much lower cost. “We found we were able to approach this project more frugally than we could have imagined. We could use our own staff resources and take our time, not requiring contractors to work on short time frames to allow for continued use of our building. Instead, we were able to draw out the time frame for much of this work, saving tens of thousands of dollars.”

Here are the improvements to the Main Campus building: